A Brief History of our Parish

Where we come from is as important as where we are going.

In the late 1800s, when Southwest Philadelphia was mostly farmland with a few big houses, an Irish servant girl named Mary Bryan wrote to Archbishop Ryan, begging for a temporary chapel at this end of the neighborhood for the winter, when it was impossible to get to St. James Church (today St. Agatha St. James) at 38th and Chestnut. The Archbishop eventually obliged, and in early 1890, priests from of St. James began to say weekly Mass in a rented hall above a store at 49th and Woodland. On May 14, 1890, Reverend Joseph O’Neill, who had assisted at St. James, became First Pastor of the new parish, which he named St. Francis de Sales. The first parish building, a combination chapel and school (today the wing of the school containing the auditorium), was built in 1891.

In 1907, Archbishop Prendergast laid the cornerstone for the Byzantine-Romanesque style church in which our Second Pastor, Reverend (later Bishop) Michael J. Crane hoped “the soul would be lifted up to exaltation.” Architect and parishioner Henry Dagit designed the monumental structure with its Romanesque rounded arches and vaults. The iconic Byzantine-style domes, which completed the thought, were crafted by the Rafael Guastavino Company. The finished building was dedicated on November 12, 1911. Today, this neighborhood landmark has a 72-foot long marble ashlar main facade fronting on Springfield Ave., with corner towers rising to a height of 97 feet. The center Guastavino dome is 62 feet wide with its springline ninety feet above the nave floor.

The design of our church, honoring French patron Saint Francis de Sales, likely drew inspiration from a late 19th century European architectural movement — embracing the style of medieval Southern French Byzantine-Romanesque churches as an alternative to “Protestant” Gothic pointed arches and steeples. But, as architectural historian Roger Moss noted in Historic Sacred Places of Philadelphia , the building is “more than a rare example of the Byzantine Revival style in Philadelphia. It is also one of our three landmark examples of Guastavino tile construction” with distinctive domes and vaults built using interlocking layers of terracotta tiles (The Penn Museum and Girard Bank — Ritz Carlton Hotel are other local examples). Rafael Guastavino’s works are prized: Structural Engineer and Guastavino authority John Ochsendorf at MIT has opined that the tile domes form “some of the most exceptional masonry structures in history.”

The building has largely maintained its historic appearance over the decades.

Outside, the domes were covered over with shiny colored tiles in 1956, in an effort to stop chronic roof leaks; the tiles were recently removed and the concrete shells sealed and painted to match the original colors without water-seeping cracks (and will soon be painted again).

For the 1965 Diamond Jubilee, the interior of the church was modernized with small blue ceramic tiles coating the walls of the nave, and modern blonde wood pews replacing the dark quartered oak. In the 1990s, most of the peeling tiles were removed and the walls neatly stuccoed; the pews are currently being refinished. The most notable historic renovation left the smallest footprint: in 1969, for the New Mass of Vatican II, renowned architect Robert Venturi created an “island of modernity,” in the main sanctuary of the church to accommodate a streamlined forward-facing plexiglas altar and lectern. His concept was interesting, but his neon lights proved distracting, and were quickly taken down; the sleek modern furnishings were also gradually removed so that today, little remains but memory — which we have recently revived, to give the renovation its proper place in our history.

We have a new chapter to our story now: in 2007, another great old city parish, Most Blessed Sacrament, at 56th and Chester (founded in 1901), combined with St. Francis de Sales to form the new, merged parish of Saint Francis de Sales United by the Most Blessed Sacrament. Our present marble freestanding altar in the sanctuary was brought from MBS when the building closed.

Our church basement adds nuance to our chronicle. It began as a multipurpose area (Fifth Pastor Bishop McShea reportedly recalled roller skating there as a boy), later repurposed for religious services. In 1953, the Dagit firm completely refurbished the space, creating the 1950s-modern Lower Church to help accommodate the many Masses for the massive congregation of the era. From 1975 to 2018, the Lower Church was home to the Vietnamese community; a Hispanic community, sharing our church from 2013 to 2020, later also used the space. Now, it is awaiting its next stage of life.

Music has always been important to de Sales. The first all-male choir was established in 1911. From 1921 through the mid-1960s, a Boy Choir of over 100 choristers sang a large repertoire of classical music at High Mass, and made several recordings with the Philadelphia Orchestra. The choir disbanded in the late 1960s during the folk music era. Organist Bruce Shulz arrived in 1969 to renew the music program. The present mixed and diverse choir, with its eclectic repertoire, has sung at the White House, as well as at Bartram’s Garden, Phillies games, and other venues. The Philadelphia Orchestra recorded Saint Saens Symphony No. 3 in the church, using the historic Haskell organ, in 1980.

The parish celebrated its 125th Anniversary in 2015. Reverend Eric Banecker is now our Seventeenth Pastor.

Find more of our story at our SFDS Parish History Committee website: Check out their blog here!

SFDS has been the object of architectural and casual curiosity for years and frequently written up by church-hoppers and local historians alike. Below is a sample of some local press: 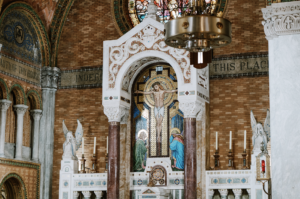